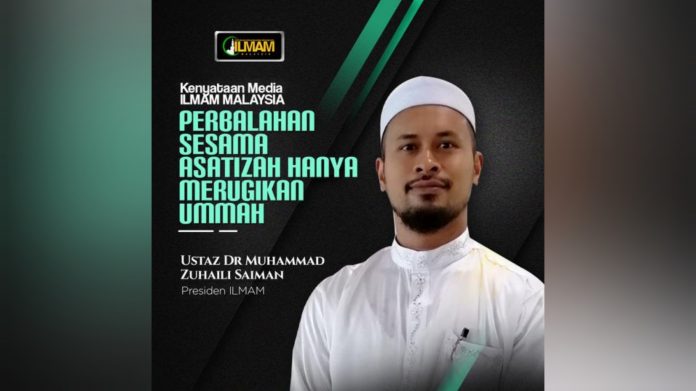 ORGANIZATION Lepasan Mahasiswa Mesir Malaysia (ILMAM MALAYSIA) called on all Asatizahs to find common ground on a topic of debate so as not to drag on until controversies arise leading to disputes between Asatizahs.

The social media space should be a platform to seize the opportunity to provide information scientifically and according to the general readers’ level of thinking so that what is presented is clearly and well understood according to Islamic balance and matches with the manhaj. Ahli Sunnah Wal Jamaah.

Extreme ideology that is easily misleading, not to mention politicizing others in khilafiyyah matters, is an ideology that must be curbed because it will lead to a turbulent situation. Such extremism is clearly not based on the actual manhaj, even when compared to the image of the Salafists.

On the issue of justification of heresy, the asatizah must be careful because the debate on such matters is about the furuk, which cannot be blindly punished as heresy.

An academic debate can be implemented, but condemning something as dhalalah heresy on the grounds that this matter was not done by the Prophet SAW is not a good approach because such an issue has been going on for a long time.

What the asatizah must do is straighten out their understanding with the guidance of the administration of the khilaf, as well as celebrate the local uruf that does not contradict the syariah.

Reactions on social media attacking each other shows a bad atmosphere and is even detrimental to the ummah. A society that is following the asatizah by giving an opinion that is presented will lead to fights and divisions of the ummah.

The asatizah must be good at tailoring the debate by presenting a topic based on the category of the listening audience.

Not all discussion topics that involve basic rhetorical skills should be open to the public. It will result in the intervention of unauthorized persons to give opinions without the discipline of true knowledge.

ILMAM Malaysia also calls for different streams and manhaj but as long as it is in accordance with Quran and Sunnah, always bermuzarakah each other with the following approach:

Yo. Strive to ensure that you do not contradict the views of previous muktabar ulema.

ii. Although today’s ijtihad is different, manners and respect for the ijtihad of previous scholars on a subject should be given priority.

iii. Ensuring that the outcome of the debate leads to public maslahah while preserving brotherhood in Islam.

IV. Stay away from extreme attitudes and beliefs such as easy disbelief and polytheism, as well as not being intolerant and labeling Wahhabis who disagree with you.

Furthermore, asatizah are urged to focus on issues of divisive society that are far from clear religious understanding.

The khilafiyyah problem has already been solved by the above scholars. Don’t waste much time while many other ummah topics for dissection need to be done along with a massive push.

This can be seen in the issue of insulting Rasulullah SAW, the explanation of the Bon Odori ceremonial dance, and national issues related to economy, education, food security, and many more. Naturally, the asatizah play a larger role in apparently discussing solutions from an Islamic perspective.

ILMAM Malaysia once again calls on all asatizahs to join forces to face the problems of our compatriots and the ummah by bringing Islamic solutions. Please handle khilafiyyah affairs well and harmoniously, don’t let it harm our relationship with others.