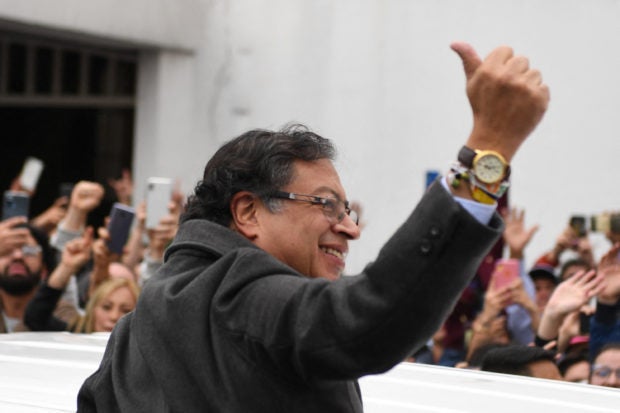 Colombian left-wing presidential candidate Gustavo Petro gives a thumbs up as he arrives at a polling station during the second round of presidential elections in Bogota, on June 19, 2022. Colombians vote for a new president in an election full of uncertainty, as ex-guerrilla Petro and millionaire businessman Rodolfo Hernández compete for power in a country fraught with widespread poverty, violence and other ills. (Photo by Daniel MUÑOZ / AFP)

With more than 99.5 percent of the votes counted, Petro, the 62-year-old former mayor of Bogotá, had an undisputed lead of more than three points with around 700,000 more votes than Hernández, 77.

“Today is a party for the people. Let’s celebrate the first popular victory,” Petro wrote on Twitter.

Hernandez said he accepted the result in a Facebook Live broadcast.

“I hope that Mr. Gustavo Petro knows how to lead the country and is faithful to his speech against corruption,” said the construction tycoon.

Petro will succeed the deeply unpopular conservative Iván Duque, who was barred by Colombia’s constitution from running for re-election, in a country fraught with widespread poverty, rising violence and other ills.

Read More :   Date A Season 5 Release Date Live in US, UK and Australia

“May so much suffering be cushioned by the joy that today floods the heart of the Homeland. This victory is for God and for the People and their history. Today is the day of the streets and squares,” added Petro.

Abstention was expected to be high among Colombia’s 39 million voters amid fears a tight result could spark post-election violence.

To ensure security, some 320,000 police and military have been deployed.

The election observation mission said one of Petro’s election monitors and a soldier were killed, both in the south.

Colombia is no stranger to political violence, with five presidential candidates assassinated throughout the 20th century.

Before the first round of this year’s presidential elections, several candidates received death threats.

When he voted in Bogotá, Petro, who comfortably led the first round last month, urged his supporters to participate as rumors of electoral irregularities circulated on social media.

“Today, without a doubt, we must defeat any attempt at fraud with mass participation,” he said.

The national registrar, Alexander Vega, denounced those fears as “disinformation”, while Hernández, who voted in the northern city of Bucaramanga where he was mayor from 2016 to 2019, accused Petro of “creating an atmosphere of fraud”.

Read More :   What are the functions and purposes of the State?

“It is very dangerous for candidates to play with this idea (of fraud), it could easily erupt in post-election unrest,” Elizabeth Dickinson, a Colombia analyst at the International Crisis Group in Bogota, told AFP.

With the traditional political powers suffering a heavy defeat in the first round, many early voters seemed undecided, not only about who to vote for but what the candidates stood for.

Petro has been in politics for 30 years, while Hernández is an unconventional outsider with little experience.

Valentina Ríos, 19, who voted in Bogotá, said that whoever wins “at least it will be a change.”

“For me, neither of them represents a change,” replied Alejandro Bueno, 20, an economics student in the capital, who hoped for “a peaceful transition to the next government.”

Petro will have to contend with a country reeling economically from the coronavirus pandemic, a surge in drug-related violence and deep-seated anger at the political establishment that boiled over in massive anti-government protests in April 2021.

Nearly 40 percent of the country lives in poverty while 11 percent is unemployed.

Leftist ideology is inextricably linked in the minds of many Colombians to the country’s multifaceted six-decade conflict, leaving many fearful of what a Petro presidency would represent.

Read More :   What are the hidden dangers of the Internet for children?

Petro was a radical left-wing urban guerrilla in the 1980s who spent nearly two years in jail.

But his M-19 group made peace with the state in 1990 and formed a political party.

Impact of the Venezuelan ‘tragedy’

“The concern comes from the experience of leftist governments in the region,” Patricia Muñoz, an expert at the Pontificia Universidad Javeriana, told AFP.

However, he said it is understandable since Colombia has been more affected than any other Latin American country by “the tragedy and the nightmare of Venezuela.”

Until a few months ago, Hernández was a virtual unknown outside of Bucaramanga.

He made the fight against corruption his main campaign commitment, although he himself is under investigation for corruption.

He had promised to “reduce the size of the state, end corruption and replace inept officials.”

But his other policies were unconventional and he lacked a clear program.

Do not miss the latest news and information.